Art tells stories. Apart from its visual appeal and use of techniques, what perhaps captivates us when looking at art is also the artists’ thought processes behind the creation of the work. Ascribing meaning to what is otherwise an object makes art viewing cathartic and interesting. Yeo Siak Goon’s artistic representations of the relationship between humans and the natural and physical environment enchants viewers to find meaning, even at the smallest details. Having painted his nude series and tropical series, Yeo is now exploring spatial and temporal relations to call for the re-evaluation and admiration for a place’s history.

It is therefore almost natural for Fiidaa Art to have contacted Siak Goon for the commissioning of artworks for The Capitol Kempinski Hotel, Singapore. Located at the heart of Singapore’s Civic and Cultural District, the hotel stands at the restored Stamford House and Capitol Building – a place rich in heritage and historical significance. 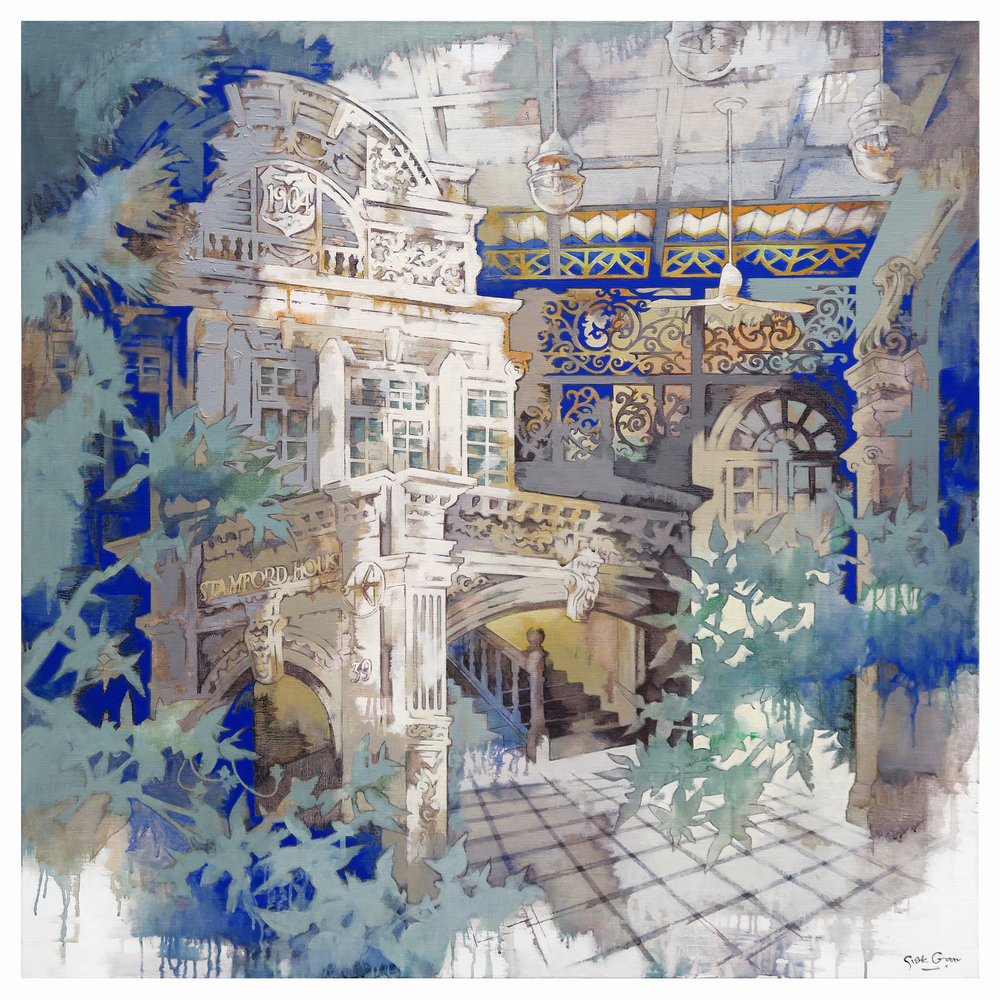 Stamford House, 2018 is aptly placed closer to the hotel’s Stamford Wing in the lobby reception of the hotel. Siak Goon plays on the relationship between time and space by blending the various facades and interiors of the building, old and new, into a single painting. We are reminded of Stamford House’s long history with its neoclassical architecture and the “1904” emblem, the year of the building’s completion. At the same time, we find hints of the new and the reconstructed. The fans and lanterns can be found outside the corridors of the Stamford Building, and the colourful stained glass is part of the ceiling in the All Day Dining Restaurant. Similarly, The Big Boss, 2018 highlights Capitol Building’s endless charm by combining the prominent features dating back to the 1930s through to the present. Once Singapore’s premier cinema and theatre since the 1930s, Capitol Theatre is most remembered for its red neon sign and art deco architectural style. 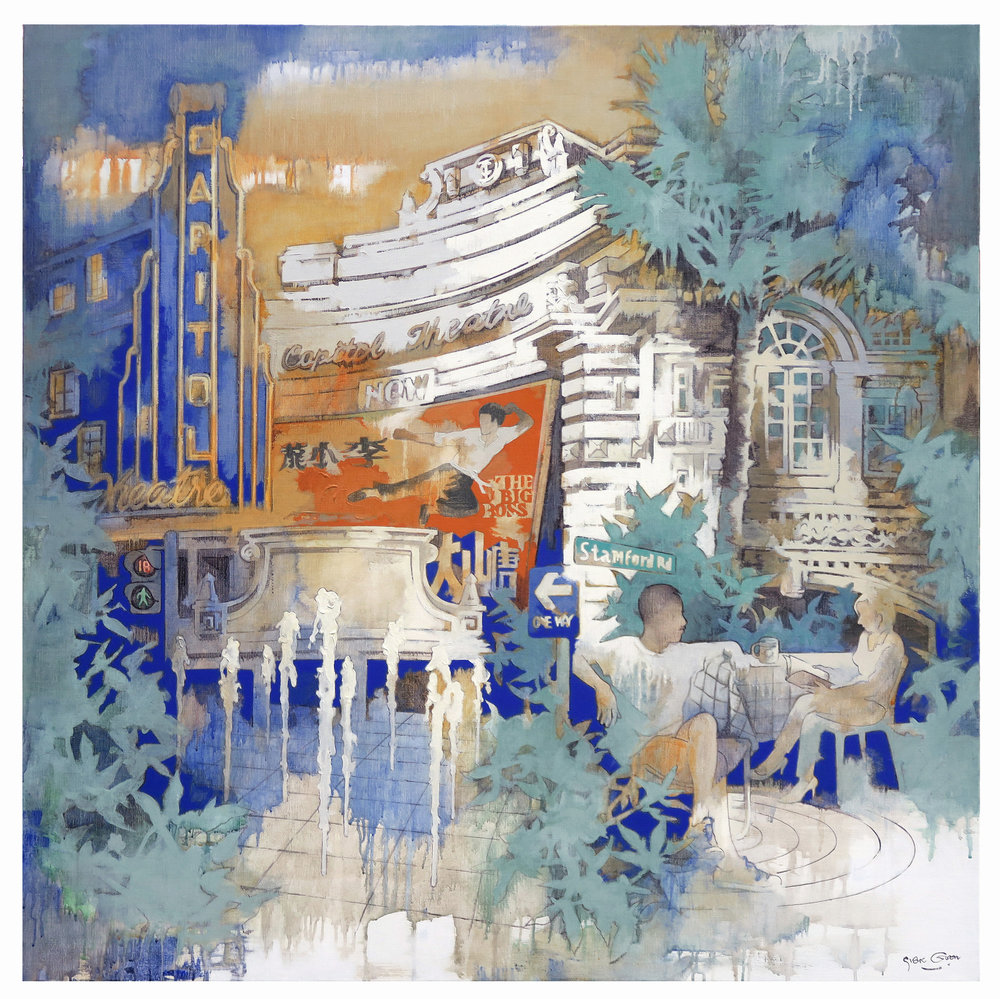 Each detail is intentional. The fountain, for instance, is painted as it is a feng shui symbol of wealth and prosperity. Similarly, the number ‘18’ on the traffic light countdown is used for its auspicious symbolism. People are painted without their faces to relate to the art viewer – we can project ourselves, and share the lived experience of those in the painting. In The Big Boss, 2018, the painting invites the viewer to relax and enjoy the rich historical vitality of the building.

Siak Goon also uses colour to signify time. Oranges are used to depict sunshine and day, while cobalt blue is used to accentuate shadows and depict night. Not only does this portray the Capitol Theatre as an entertainment hub round-the-clock, the two complementary colours elevates its visual appeal. 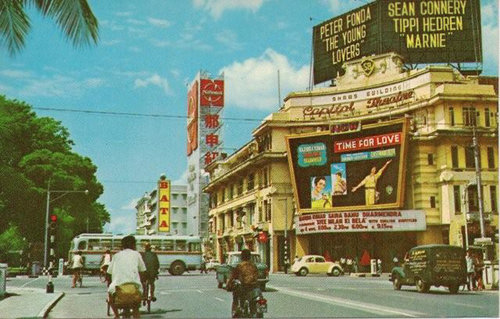 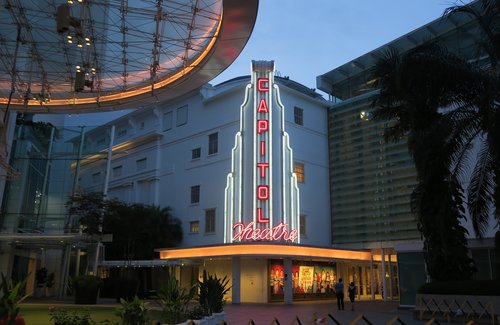 And perhaps the most eye-catching of all, is the movie poster of martial arts action film ‘The Big Boss’ plastered across the theatre’s billboard. When asked why he chose this film, Siak Goon recounts his personal experience of painting the movie poster on the streets for it to be hung on this exact Capitol Theatre in the 1970s.

As an artist who left his hometown in Malaysia to come to Singapore alone at the age of 14, Siak Goon received his art training in a rather unorthodox fashion. Starting with commercial art, he painted posters like the one above. The inflexibility and static nature of the work however began to frustrate him, and financially constrained to attend art schools, he learnt art in art lessons offered by Community Centres (CCs). 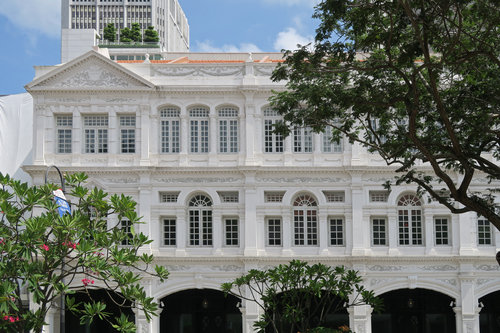 Rain Trees and Frangipanis surrounding the hotel, photographed for reference.

The Big Boss, 2018 hence characterises Siak Goon’s artistic style as an artist who sources from his own worldly experiences and representing them in alternative ways. The research work he puts into each painting is immense – from personally taking photographs of the site and its surrounding vegetation, to meticulously digging archives of the place’s history to best translate them on canvas.

Like my other paintings, these two paintings are an expression of my memory and interpretation of the landmarks.

We hope that Stamford House, 2018 and The Big Boss, 2018 can introduce the hotel’s visitors to the rich history and cultural significance of the Stamford House and the Capitol Building respectively.

The two paintings can be found at the lobby reception of The Capitol Kempinski Hotel, Singapore. 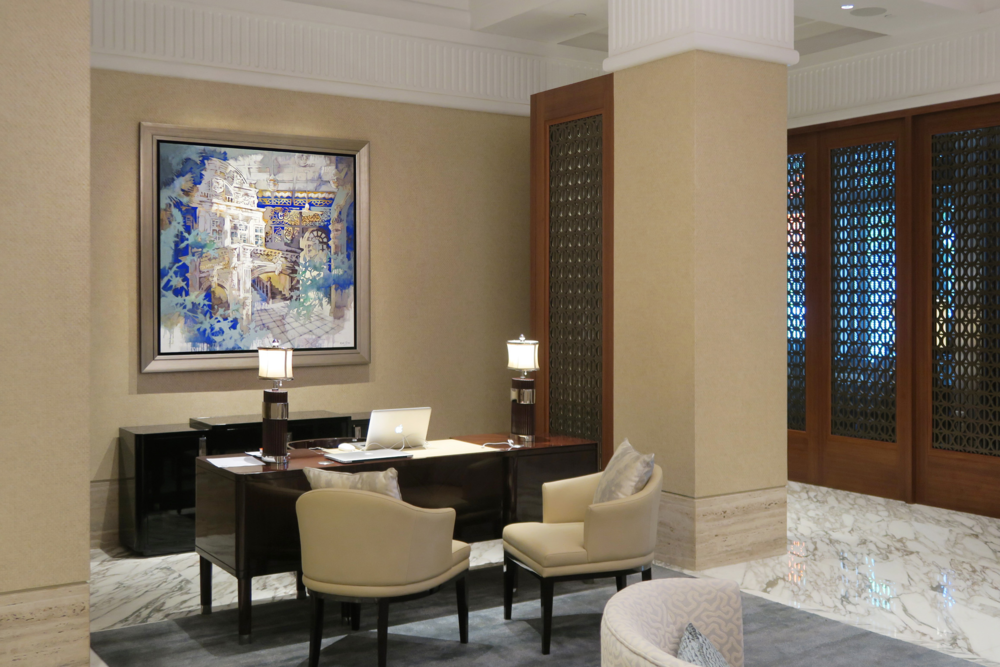 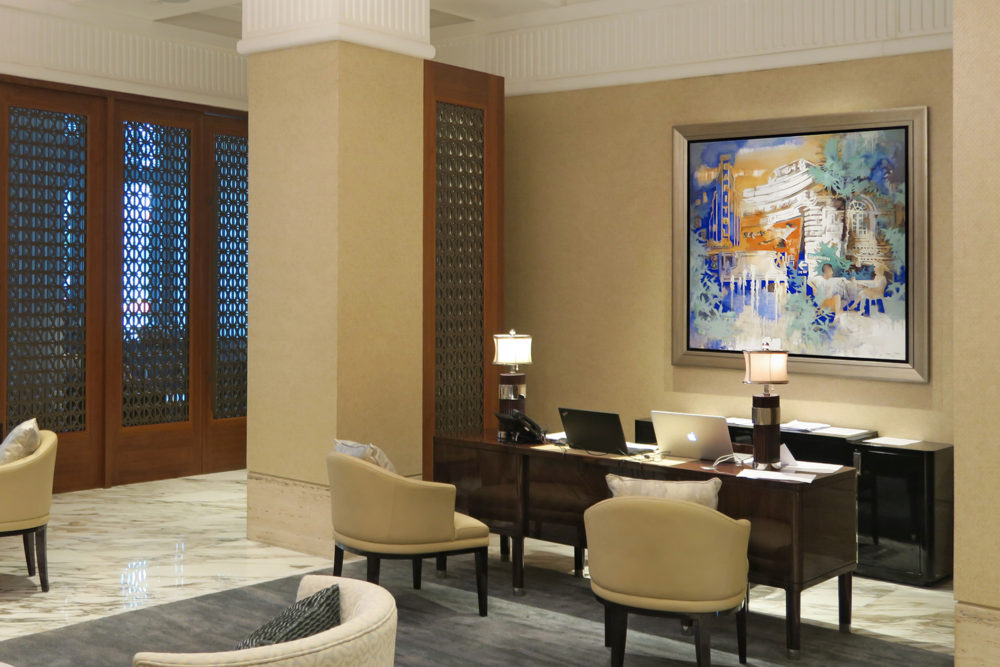 We would like to thank Mr. Yeo taking time to share about his life, his creative processes and thoughts behind the artworks.